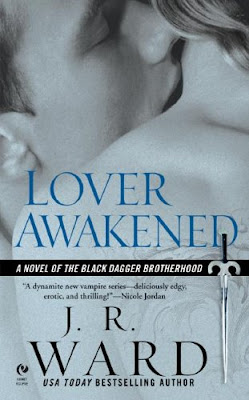 A former blood slave, the vampire Zsadist still bears the scars from a past filled with suffering and humiliation. Renowned for his unquenchable fury and sinister deeds, he is a savage feared by humans and vampires alike. Anger is his only companion and terror his only passion-until he rescues a beautiful female from the evil Lessening Society.

Bella is instantly entranced by the seething power Zsadist possesses. But even as their desire for each other begins to overtake them, Zsadist's thirst for vengeance against Bella's tormentors drives him to the brink of madness. Now Bella must help her lover overcome the wounds of his tortured past and find a future with her.
Review:
Hi!  My name is Jamie and I spent my Sunday reading Black Dagger Brotherhood novels. I think that's a hell of a way to spend a day.  Sexy as hell warrior vampires and the ladies they eventually learn to love.  Hell of a way.  I actually got through 2 novels yesterday.
Lover Awakened is Zsadist's story.  When Zsadist was young he was stolen from his family and turned into a blood slave where absolutely HORRIBLE things happened to him.  To the point that his twin actually tells Bella that Zsadist isn't broken, he's ruined.  Cause if something is broken you can sometimes fix it right.  Everyone is scared of him because he's scarred (he's got a LOT of nasty ass scars from his bloodslave days) and borderline sadistic.
But really all it takes is a strong female vampire to turn Zsadist's world upside down.  That's where Bella comes in.  After her ordeal (which starts in Lover Eternal) with the lessers she's beyond shaken and she's always had a crush on Zsadist.  And that's where she starts turning him around.  Making him feel loveable and almost "human" again.
Unlike the last two books there is a LOT of sadness in this book.  I don't want to gve too much away but y'all should know that this story is NOT all "sunshine and roses."  And not all the sadness comes from the main characters either.
What I've noticed so far in this series is that the books seem to rotate from being a LOT of fighting and almost a lot of romance to a LOT of romance and almost a lot of fighting.  Well this book happens to be of the a LOT of fighting and almost a lot of romance variety.  Don't get me wrong there is a considerable amount of romance but given Zsadist's past he's a fighter learning to be a lover.  Actually, because of his past he feels that he's unattractive AND unloveable.  Double whammy!
What I also noticed about this book was there wasn't a much buildup to the next story in the series.  In the last two books there was buildup to each character's story.  I didn't feel that that was happening in this story as much as the other two books.
Overall, I thought though it had more than it's fair share of sad moments that Lover Awakened was a great read.  Of the three books in the series that I've read so far I'm having a hard time coming up with a clear cut favorite.  But I think that with Zsadist's past and his hang up's he just might be slightly ahead of the other two books.
Posted by Jamie at 2:25 AM