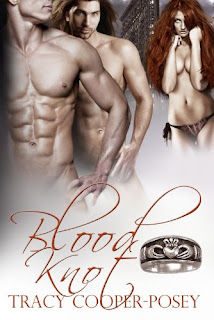 Winter, a professional thief who can manipulate others' biologies by touch, accidentally "healed" her former partner-and former vampire-Sebastian, whom she secretly loves. Her healing created a symbiot pairing between them that neither of them wants.

Nathanial, a sexy thousand-year-old vampire and Sebastian's ex-lover, talks Sebastian and Winter into stealing evidence that will expose all vampires to the world. But Nathanial is a puppet-master who doesn't believe in falling in love with humans, leaving Winter unsure of his real feelings for her once he seduces her, or how he feels about Sebastian, the former vampire-now-human whose life he has turned upside down once more.

But the evidence they steal is hot property. The future of all vampires is on the line and others will stop at nothing to get it, leaving Sebastian, Winter and Nathanial with no allies but each other. They must trust each other to survive. Only...can they?

This was a very interesting read.  I've only read 1 other book where m/m/f love scenes were involved and I can definitely say that this one trumps it big time!  Hot doesn't even begin to cover it!  The premise of the story was really interesting to me because it involved two male vampires and one female who is supposedly human who are best known throughout the vampire world for their skills in stealing.

Nathanial, or Nial, is one smart cookie and not to mention one sexy vamp, who has a way of manipulating others minds to get what he wants.  I saw him as someone who needed to constantly be in control, it showed in his encounters and actions towards Winter and Sebastian.  He always seemed to be in the minds of others, being able to read them and make them react accordingly.

Winter was one tough ass chick that who was labeled a human but isn't really.  See she was born by human parents but she was given a gift that no one else has.  She has the ability to reach into other individuals simply by touching their skin and completely change their biological chemistry or heal them if needed.  That includes herself as well.  There was an instance in the book where she was able to heal herself from being poisoned simply by mentally reaching within herself and breaking down/diluting that strain of poison.  Therefore, reversing it and making her immortal like a vampire.


Sebastian, is yet another smexy vampire (side note: why are the paranormal ALWAYS uber sexy?) who has worked with Winter for two years.  In that time he's also been keeping his true feelings away from Winter.  See Winter has saved his sexy vampire backside numerous times and this last time was ALMOST the time where he actually broke down and told her how he felt...ALMOST.  What kept him from confessing?  TINY SPOILER>>> Thinking she was human. <<<END TINY SPOILER  The last time Winter saved him he was on the brink of death.  That's where she panicked and healed him back to human.

For me, this is where the story got really interesting.  After healing Sebastian, Winter finds that she has inherited some traits that she definitely did not have before...Like requiring blood, more specifically Sebastian's blood.  Also, her eyes and her hair have also changed on a permanent basis.

Sebastian thinks he was turned back into a human being because his biological chemistry has changed.  He's suddenly able to eat food and seems to be craving it.  This is where things get difficult for Sebastian, he's having an extremely difficult time dealing with all the truths revolving around the situation and decides that he's just going to run away from his feelings and trys to forget about Winter all together.  Well, until his ex-lover Nail shows up and persuades Winter into helping him find Sebastian.

This is the point where the heat-ometer goes up several notches. Winter and Nial keep finding themselves in each other's arms with an heightened sense of passion.  Especially AFTER they find Sebastian and the old flames are stoked between old and new lovers.

I decided that I couldn't give this book a 5/5 out of because I thought that there were some area's where a little more clarification would have been helpful.  One area in particular, what kind of immortal exactly was Winter.  It was very clear that she wasn't entirely human but wasn't exactly a vampire either.
Posted by Jamie at 2:47 AM