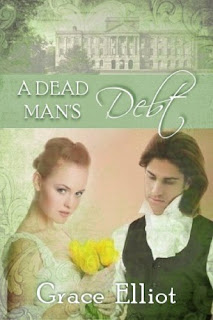 A Dead Man's Debt - a story of blackmail, duty and an unexpected love.

After publicly humiliating a suitor, Miss Celeste Armitage is sent from the Ton in disgrace and resolves never to marry. But when she finds a sketch book of nude studies and discovers the artist is her hostess's eldest son, Lord Ranulf Charing, she finds herself dangerously attracted to exactly the sort of rogue she is sworn to avoid.
Nothing is as it seems. Lord Ranulf's life is a facade and he is being blackmailed over his late brother's debts. But just as the darkly restless Ranulf unexpectedly learns to love, the vengeful fury of his nemesis unleashed. In order to protect Celeste, Lord Ranulf faces a stark choice between duty and true love...
However Ranulf has underestimated Miss Armitage's stubborn resolve to clear his name, and in so doing places the woman he loves in mortal danger....

I found this historical romance to be a refreshing change of pace from all the YA I've been reading lately.  I haven't read many books that center around the Regency era but I did really enjoy this book.  I think for me the best part of the book was the "roller coaster" of emotions as well as twists and turns that took place through out the book.  Usually, I'm not one for "roller coasters" but I found this particular one to be of my liking, especially since it helped keep the book at a fast pace.

Our heroine Celeste, is sent away by her family after she refuses a suitor.  She's sent to live with Lady Sophia Cadnum at the Hazeldene House, where she is quite content to be Lady Sophia's companion if it means that she never has to marry.   Celeste don't want to be tied to a man and become his property...she's not interested in that in the least.  I saw Celeste as an independent woman for the time we are talking about.  But then Celeste meets Lady Sophia's son Lord Ranulf Charing and that's when the "roller coaster" ride really begins.

But unfortunately there are many challenges that they must over come in order to get their chance at HEA. Oh, you know the basic stuff....He has to convince her that he's someone she'd want to be married to, she has to loosen up on the reigns when it comes to her opinion of love and marriage, then there's the blast from his past.

Overall, I thought that the book was EXCELLENT.  I thought that the characters were extremely well written and complementary to one another.  Writing wise I found the book to be crafted in a way that made you want to keep reading.  For me personally, I HAD to know what was going to happen next.  I would highly recommend this debut author to anyone who enjoys historical romance.  I will definitely be checking out more of Grace Elliot's books in the future!
Posted by Jamie at 2:43 AM