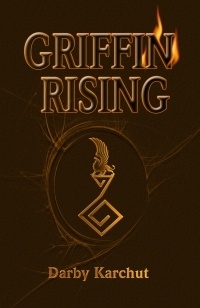 For Griffin, it's time to angel up.

For centuries, rumors have abounded of a lowly caste of supernatural beings known as the Terrae Angeli. Armed with the power to control Earth, Fire, Wind and Water, these warriors secretly serve as guardians for mortals in danger.

But for one young angel-in-training, Griffin, life is hell as a cruel master makes his apprenticeship a nightmare. On the verge of failing, a new mentor, Basil, enters his life and changes it forever. It is their father-and-son relationship, sometimes turbulent, often hilarious, always affectionate, that sings through the story like a pure note.

Masquerading as the average teen next door, Griffin struggles to learn his trade, navigate the ups and downs of modern life among humans (including falling in love with the girl next door), and prepare for the ancient trial-by-combat every apprentice must pass at sixteen or be forced to become mortal.

I was approached a few months back by the author to read and review Griffin Rising on my blog.  Up until that point I had not even heard of this book.  I'm really glad that the author approached me, if she hadn't I might have missed out on a PHENOMENAL debut YA novel.  Griffin Rising is what my co-workers and I refer to as Awesome Sauce.  Let's put it this way, the "Awesome Sauce" list is REALLY short....The Hunger Games trilogy, No Mercy, Mercy Kill and Griffin Rising are it.

What I really liked about Griffin Rising is that the book is actually a coming of age story disguised as an angel adventure. Once I started reading I was instantly attracted to characters, even the evil Nicopolis.  I also felt that I was better able to connect with the characters via their journal entries.  I really enjoyed at the contrast that Darby brought to the character of Griffin.  I enjoyed following Fin through his struggles as not only an angel apprentice, training for his ultimate test, but also a teenager.  At times Griffin showed that he was wise beyond his years and at other times he was kind of a smart ass and your "typical" teenager.

One of my favorite parts of the whole book was the actual relationship between Griffin and his Mentor Basil.  Basil comes into Griffin's life after Griffin is removed from his former Mentor Nicopolis who happened to be extremely abusive and rooting for Griffin to fail (Nicopolis sounds like a real winner!).  When Basil enters Griffin's life everything starts to change for the better.  But it still takes Griffin a long time to start opening up to his new Mentor.

Then not long before Griffin is scheduled to take his test a mortal teenage girl, Katie, moves in across the street.  A sweet teen love develops which adds a whole new dimension to the story.  That is when things get real interesting between Basil, Griffin and their new neighbors.

Shortly before Griffin's test, Basil receives word that Griffin's past is going to come back to haunt him.  Does Griffin pass his ultimate test?  To find out your going to have to pick up a copy of Griffin Rising.

I hadn't heard of this one, but I'll have to keep my eye out for it!