Book Review ~ The Lost Dogs: Michael Vick's Dogs and Their Tale of Rescue and Redemption by Jim Gorant

NOTE: There is the use of cuss words in the review that follows. 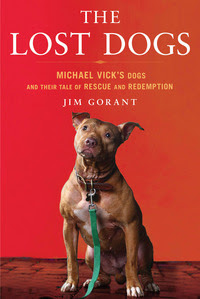 Title: The Lost Dogs: Michael Vick's Dogs and Their Tale of Rescue and Redemption
Author: Jim Gorant
Series:
Genre: Non-fiction, animals, sports
Publisher: Penguin
Release Date: 2010, September 16
Format: E-Book, 488 pages
Source: Bought for my Barnes and Noble Nook
Rating: 5/5
Smuttiness: N/A
Synopsis (from Goodreads):
An inspiring story of survival and our powerful bond with man's best friend, in the aftermath of the nation's most notorious case of animal cruelty.
Animal lovers and sports fans were shocked when the story broke about NFL player Michael Vick's brutal dog fighting operation. But what became of the dozens of dogs who survived? As acclaimed writer Jim Gorant discovered, their story is the truly newsworthy aspect of this case. Expanding on Gorant's Sports Illustrated cover story, The Lost Dogs traces the effort to bring Vick to justice and turns the spotlight on these infamous pit bulls, which were saved from euthanasia by an outpouring of public appeals coupled with a court order that Vick pay nearly a million dollars in "restitution" to the dogs.
As an ASPCA-led team evaluated each one, they found a few hardened fighters, but many more lovable, friendly creatures desperate for compassion. In The Lost Dogs, we meet these amazing animals, a number of which are now living in loving homes, while some even work in therapy programs: Johnny Justice participates in Paws for Tales, which lets kids get comfortable with reading aloud by reading to dogs; Leo spends three hours a week with cancer patients and troubled teens. At the heart of the stories are the rescue workers who transformed the pups from victims of animal cruelty into healing caregivers themselves, unleashing priceless hope.

I was checking out the new releases on Barnes and Noble the other day and I saw this book.  I'm an animal lover and I thought that the premise of this book sounded really interesting, so I downloaded it onto my Barnes and Noble Nook.  I started to read it at about 2 am Sunday morning and I could NOT stop reading it until I had read all 488 pages e-book pages (the print version is 304 pages).  I was absolutely FLOORED by some of the things that I had read.

Now if you are going to read this book I must warn you in the beginning there are a few graphic scenes that show just big of an fucking jackass Michael Vick truely is. And they let this fucker BACK into the NFL! The author of this book doesn't hold anything back really.  He goes into the gorey details of how Vick and his "crew" disposed of dogs that just didn't have it in them to fight.

Once the bust is made on Vick's property and the dogs are confiscated then there is a big hoopla about if the case is going to be a state/local case or a federal case.  In the end it became a federal case but the state/local attorney did slap some charges on about 5 months AFTER the case started.
While the case is going on there is much discussion about what should be done with the dogs.  There were many who said that they should ALL be destroyed because they were taken from a fighting situation, which makes them steriotypical "killers" naturally....I mean hell...even PETA said destroy them.  In the end, after much discussion and bringing in outside help.  It was decided that they would evaluate each dog individually.  After all the evaluations were done, of the 51 dogs that were seized, only 1 was deemed to dangerous to even evaluate.
Because I don't want to give away too much of this book away I'm not going to go into very many more deatils.  All I'm going to say is that there is a happy ending for the remaining dogs...They actually get to learn how be a dog and do dog things and many of them have been adopted out and several are even therapy dogs.  I hope that if you read this book you learn as much about this breed that is known as the "nanny dog", because it was originally bred to be a family pet as well as a protector of the farm, as I did.  I can honestly say that after reading this book, it has definately changed my opinion on the American Pit Bull Terrier.
Posted by Jamie at 3:19 AM