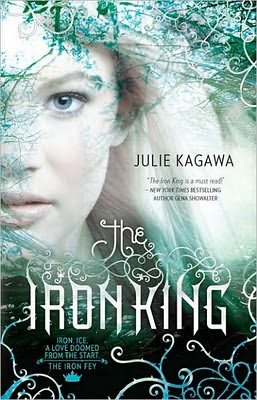 Something has always felt slightly off in Meghan's life, ever since her father disappeared before her eyes when she was six. She has never quite fit in at school…or at home.
When a dark stranger begins watching her from afar, and her prankster best friend becomes strangely protective of her, Meghan senses that everything she's known is about to change.

But she could never have guessed the truth—that she is the daughter of a mythical faery king and is a pawn in a deadly war. Now Meghan will learn just how far she'll go to save someone she cares about, to stop a mysterious evil no faery creature dare face…and to find love with a young prince who might rather see her dead than let her touch his icy heart.
Review:
OMG! I absolutely LOVED this book! Fan-freaking-tastic! I'm usually NOT a real big fan of faery books..Vampires, werewolves and those sorts of paranormal are more up my alley. But once I started reading it I had a VERY hard time putting it down.
Julie Kagwa is VERY vivid and thorough of her descriptions of not only the characters, but of Nevernever land and the overall landscapes of the various Fey Courts. I felt like I was right there with Meghan and crew while they were on their journey.
There is action and "weird" things happening almost from the very start of the book. So your
on a fast track to Nevernever land real quick. See Meghan's life is turned upside down when her little brother (technically he's her 1/2 brother but who's being technical?) is kidnapped and a super nasty changeling (who attacks both Meghan and her mom) is left in his place.
But this is where Meghan's best friend Robbie comes into play. See in actuality Robby is the prankster Puck from a Midsummer's Night Dream. And off they go through the "trod," which is the portal into Nevernever land (conviently found in the closet of Meghan's brother.) As beautiful as Nevernever is a VERY dangerous place and you never really know who your friend or your foe is.
Pretty much everything keeps going wrong, more so when Grimalkin, who is a cat sith gets involved. Meghan keeps finding herself in one pickle after another, which makes her goal of finding her little brother seem almost unattainable. She's fighting trolls, gremlins, other faeries, each other, and other mythical creatures. It seems that Meghan and crew just couldn't catch a break if their lives depended upon it.
There were a couple parts of this book that were predictable. Like...Meghan is the daughter of the Summer king, so naturally she's gonna go and fall for the son of the Winter Queen. In all honesty I think that that piece of predictability was key to the story. I would have been severly dissapointed if it wasn't written the way it was. But for the most part the story kept me on my toes and guessing what was going to happen next.
Unlike Meghan (who is there looking for her brother and wants to get back to her life ASAP), it seems that pretty much all the rest of the characters in the story have a hidden agenda or have something that is brewing right there under the surface.
I think that Robbie/Puck takes the cake in this one, with his wicked sense of humor. Meghan is a very likeable character and seems to grow as the story goes along. Sometimes you think she's not real bright....Like bargaining with a faery. But just when you think she's going to go and do something dumb yet again, she throws you for a loop.
Which brings us to Ash, who is the prince of the Winter Court. He's written as a total hottie who is seriously cold in so many ways. He's attracted to Meghan but at the same time he wants to kill her. He even thinks about it several times but manages to stop himself. Ash is a superior swordsman with his sword of iciness and if his sword isn't cutting it....he likes to drop his predators by shooting icicles at them. Which I think is pretty cool.
I have to agree with Alyssa from Teens Read and Write. I just don't think that there was enough Ash in the story. We see him a little bit in the beginning but after that we don't really see him again until your well over a 100 pages into the book. Really that is my only complaint with the book....I wanted MORE Ash.
I can hardly wait until the second book comes out in the series. The Iron Daughter is being released in August. August seems so VERY far away!
Posted by Jamie at 3:07 AM