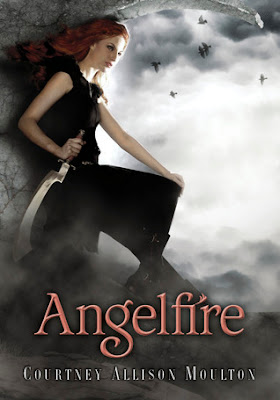 When seventeen-year-old Ellie starts seeing reapers - monstrous creatures who devour humans and send their souls to Hell - she finds herself on the front lines of a supernatural war between archangels and the Fallen and faced with the possible destruction of her soul.

A mysterious boy named Will reveals she is the reincarnation of an ancient warrior, the only one capable of wielding swords of angelfire to fight the reapers, and he is an immortal sworn to protect her in battle. Now that Ellie's powers have been awakened, a powerful reaper called Bastian has come forward to challenge her. He has employed a fierce assassin to eliminate her - an assassin who has already killed her once.

While balancing her dwindling social life and reaper-hunting duties, she and Will discover Bastian is searching for a dormant creature believed to be a true soul reaper. Bastian plans to use this weapon to ignite the End of Days and to destroy Ellie's soul, ending her rebirth cycle forever. Now, she must face an army of Bastian's most frightening reapers, prevent the soul reaper from consuming her soul, and uncover the secrets of her past lives - including truths that may be too frightening to remember.
Review:
Ellie Monroe thinks she's just your normal everyday high school senior.  The truth is she's not.  She's not your normal everyday high school senior.
Ellis has been having nightmares for a LONG time.  VIOLENT nightmares.  She has everyone, with the exception of her best friend Kate, convinced that the nightmares have stopped.  But really Ellie's just used to them because they are pretty much a nightly thing.
Then she meets Will.  To Ellie Will is vaguely familiar but she's not really able to place where she's seen him before.
Then Ellie's economics teacher is brutally murdered and that's when things start getting REALLY weird.  One night while on a walk she hears a growl and then Will shows up not long after.  After giving Will crap she's headed for home when the growl happens again.  This time Will grabs her and puts, for a lack of a better word, a "spell" on Ellie.  Now she's able to see into the Grim.  Now the nightmares are starting to make sense.
Ellie is a Preliator.  The ONLY mortal in the world with the power to fight the reapers.  And Will?  Will is Ellie's Guardian, sworn to protect Ellie.
I had NO problem getting into this book.  Once I started it I just had to keep reading...I had to know what was going to happen next.  But that's where things start to go a little bit south for me.
I had a hard time relating to Ellie.  Ellie comes from a rich family (I don't know about you but I did NOT get a $30K car for my 17th B-Day) and up until recently really didn't have very many worries.  I felt she was a little bit on the spoiled side and really almost had to be forced to rise to the occasion when trouble starting happening (with both the reapers and her dad.)  I thought that the process that Ellie was going through to remember her past took to long and was a little bit too drawn out.
I did really enjoy the flashbacks and memories from Ellie's past.  They painted a very vibrant picture of Ellie's past as the Preliator.
I also really enjoyed the action and fight scenes.  Very well crafted, though at times I felt that they were a tab bit repetitive.
Overall, I did enjoy this debut and I will be checking out the next book in the series as well.
Posted by Jamie at 3:01 AM