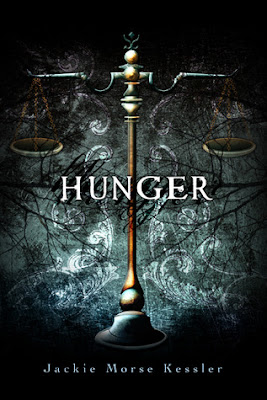 Lisabeth Lewis has a black steed, a set of scales, and a new job: she’s been appointed Famine. How will an anorexic seventeen-year-old girl from the suburbs fare as one of the Four Horsemen of the Apocalypse?

Traveling the world on her steed gives Lisa freedom from her troubles at home: her constant battle with hunger, and her struggle to hide it from the people who care about her. But being Famine forces her to go places where hunger is a painful part of everyday life, and to face the horrifying effects of her phenomenal power. Can Lisa find a way to harness that power — and the courage to battle her own inner demons?
Review:
I saw the cover of this book while checking out different YA titles on Goodreads one morning and thought that it sounded like something really interesting.  Something I needed to read NOW...So I got a copy.
I really liked the premise of the story - Horsemen of the Apocalypse and a 17 year old anorexic teenage girl as the new famine.  I thought the story overall was shockingly "real" almost to the point of being scary and uncomfortable for someone who has never dealt with the issues brought up in the book.  The research (the learning about famine) and the "the research" (from the author's personal experience) were very accurate and painted a lot of "not so pretty" pictures about eating disorders and world hunger.
Lisa is the new famine because of her eating disorder.  The "Thin Voice" keeps telling her that she's fat.  Then Death come along and throws famine in her lap.  At first she's scared to death (pun intended) of being famine.  But as the story progresses she becomes more comfortable with her new power.  She even conquers the blasted "Thin Voice".  Even kicks a little ass too!
The character that I liked the most was Death.  He wasn't real prominent character but when he was around it was memorable.  He was good looking too.  Sort of Kurt Cobainish only better and undead.
The character that I liked the least?...Hands down was the "Thin Voice."  I could NOT stand the "Thin Voice."
Posted by Jamie at 3:03 AM