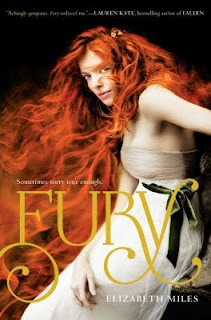 Sometimes sorry is not enough...

Em loves the winter holidays. And this year, things are really looking up: the guy she's been into for months has finally noticed her. But if she starts something with him, there's no turning back. Because he's going out with her best friend.

On the other side of town, Chase's home life is stressful and his social life's unravelling. But that's nothing compared to what's really haunting him. For Chase has done something cruel -- something the perfect guy he pretends to be would never do. And it's only a matter of time before he's exposed.

Mistakes can be deadly.
And three beautiful, mysterious girls are about to make them pay...

Fury is a debut novel that is pretty dang electrifying!  It surprised me constantly with very real and authentic characters and plot that has so many twists and turns I felt like I was on a roller coaster.  But there were times I thought that there were too many twists and turns and for me they started to detract from the story.  I thought that the idea and setup for this story was very interesting because of the use of a "plain Jane" setting, Maine, and all of the problems that arise due to the use of karma.

I really thought that Elizabeth's writing was a bullseye for Fury.  There was more than enough suspense to keep the story moving smoothly, which I really like.  I also thought that the changes between Em and Chase's points of view flowed very smoothly.  There are enough lies, drama and manipulation in the whole book that you get caught in the web and aren't able to get get away.  Another thing that detracted from the book for me was the use of profanity, talk of sexual behavior and use of certain questionable terms, I thought that these things pushed the envelope on the book being slightly more "Adult" than YA.

Overall, I thought that Em and Chase were pretty "normal" characters with "normal" problems and pretty dang likeable.  You see a lot of very noticeable growth in them as the book progresses but I really liked how the growth was not rushed.  They both make mistakes and they both learn from them and grow from them.  Even with their own secrets both Chase and Em are able to have very down-to-earth, normal relationships with their friends.
My overall thoughts on the book are a little mixed.  There were things that I REALLY liked a lot about the book and then there were things that I really DID NOT like about the book.  I'm glad that I read Fury but I'm still on the fence as to wether I will continue on with the trilogy or not.
Posted by Jamie at 6:43 AM

I completely agree with your thoughts on Fury!
I loved many things in the book but there were quite a few things I disliked!
Will still read book 2!
X