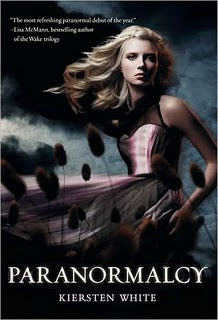 Title: Paranormalcy
Author: Kiersten White
Series: Paranormalcy #1
Genre: YA, Paranormal, Romance
Publisher: HarperCollins
Release Date: 2010, August
Format: Hardcover, 335 pages
Source: E-Book bought via Barnes and Noble
Rating: 5/5
Synopsis (from Barnes and Noble):
Evie’s always thought of herself as a normal teenager, even though she works for the International Paranormal Containment Agency, her ex-boyfriend is a faerie, she’s falling for a shape-shifter, and she’s the only person who can see through paranormals’ glamours.

But Evie’s about to realize that she may very well be at the center of a dark faerie prophecy promising destruction to all paranormal creatures.

So much for normal.


Review:
OMG!  This book was "bleeping"(read the book and you'll understand) AWESOME!  I had heard so much about this book in the weeks leading up to it's release that I decided that I needed to check it out. Evie, the main character, is able to see through other paranormals' "glamour" to what's really underneath...Like for example: Vampires....On the outside sex but underneath the glamour 'oh so NOT sexy'.  Evie thinks she's just a "normal" teenager that is able to do something "interesting" when it comes to paranormals.  But then bad things start to happen, paranormals start dying and Evie learns a couple secrets about herself.
Reth, her ex-boyfriend, who happens to be a faerie is crazy!  Through most of the book you think he's on one side but by the end you realize you were oh so wrong.  That all his craziness was supposed to be "helpful."  Then there's Lend, a shape shifting hottie!  He gets captured by the IPCA and is held prisoner for awhile.  When the center comes under attack Evie helps Lend escape.  Then we learn a little bit about Lend's life prior to being captured.
I loved the way that the story was written.  All of the dialogue for Evie and Lend were written in a way that was very believable.  Things that teens would actually say.  The dialogue for the other characters in the book were written in a very "grown up" manner....things that adults would say. The way things were described were very vivid as well.
Overall, I can hardly wait to read more of this series!  I would recommend this book to anyone who wants a fresh take on paranormal YA fiction.
Posted by Jamie at 3:04 AM