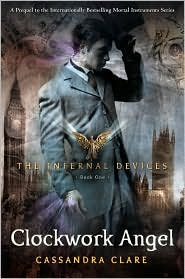 Title: Clockwork Angel
Author: Cassandra Clare
Series: The Infernal Devices Series #1
Genre: Fiction, YA, Paranormal, Romance
Publisher: Simon & Schuster Children's Publishing
Release Date: 2010, August
Format: Hardcover, 479 pages
Source: Purchased - Ebook
Rating: 4.75/5
Synopsis (from Barnes and Noble):
Magic is dangerous—but love is more dangerous still.
When sixteen-year-old Tessa Gray crosses the ocean to find her brother, her destination is England, the time is the reign of Queen Victoria, and something terrifying is waiting for her in London's Downworld, where vampires, warlocks and other supernatural folk stalk the gaslit streets. Only the Shadowhunters, warriors dedicated to ridding the world of demons, keep order amidst the chaos.
Kidnapped by the mysterious Dark Sisters, members of a secret organization called The Pandemonium Club, Tessa soon learns that she herself is a Downworlder with a rare ability: the power to transform, at will, into another person. What’s more, the Magister, the shadowy figure who runs the Club, will stop at nothing to claim Tessa's power for his own.
Friendless and hunted, Tessa takes refuge with the Shadowhunters of the London Institute, who swear to find her brother if she will use her power to help them. She soon finds herself fascinated by—and torn between—two best friends: James, whose fragile beauty hides a deadly secret, and blue-eyed Will, whose caustic wit and volatile moods keep everyone in his life at arm's length . . . everyone, that is, but Tessa. As their search draws them deep into the heart of an arcane plot that threatens to destroy the Shadowhunters, Tessa realizes that she may need to choose between saving her brother and helping her new friends save the world. . . . and that love may be the most dangerous magic of all.
Review:
This is the first book by this author that I have ever read.  I definitely will be reading more of her books in the future!  Awesome Sauce is what it is and I LOVE me some Awesome Sauce!
Even though I think this book was Awesome Sauce I did think that it got off to a slow start.  I also was confused as to how exactly Will found Tessa at the Dark Sisters house.  Did he senses her while she was in someone else's body, a random tip?  That bothered me a little bit.
There were times when I thought Will was more than a little bit of an ass.  Now I like "bad boys" but there's a difference between being a "bad boy" and being verbally and emotionally abusive.  I think at times Will walked a little bit too close to that fine line for my taste.  I guess that makes me a member of Team Jem then.
I found the writing style to be of my liking also.  Once I got past the slow beginning I thought the story was a definite page turner.  The action throughout the book was very well described also.  You felt like you were there.  I also liked how the bad guy wasn't completely obvious (at least to me) until you got closer to the end of the book.  Just when you think you have it all figured out it turns out our completely WRONG!
Overall, I really enjoyed Clockwork Angel.  The cliff hanger ending has me thinking that December will NEVER get here!
Posted by Jamie at 3:11 AM

I just got this one recently, it sounds really good, thanks for the review!