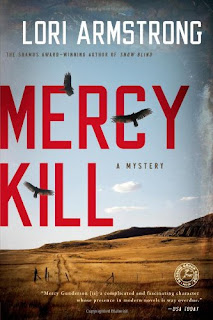 Former Black Ops army sniper Mercy Gunderson isn’t adjusting well to the laid-back rhythm of civilian life on her family’s ranch in South Dakota. To fill her time, Mercy accepts a temporary bartending gig at a local watering hole. Yet her attempts to settle in back home are tested when Titan Oil, a Canadian company proposing to run an underground pipeline through Eagle River County, sends Jason Hawley, Mercy’s former army buddy, to the area to convince ranchers to get behind the project.

While local business owners support the pipeline, Hawley’s presence riles the landowners, and Mercy is torn. After ugly threats and multiple altercations escalate tensions in the county, Mercy discovers Hawley’s brutally mutilated body in the bar parking lot. When it appears Sheriff Dawson cares more about campaigning for reelection than investigating the case, Mercy vows to find Jason Hawley’s killer—even if she has to run against Dawson for sheriff to ensure justice is served.

But Mercy soon learns her former military pal had plenty of secrets. Her search for the truth brings unwanted exposure to the county’s dark side and risks deadly repercussions for the entire community.

I put in a request for this book a LONG time ago through my library and I squealed and jumped and down like a little girl when it finally arrived for me to check out. Just like No Mercy this book was fan-freaking-tastic!

Now that Mercy is out of the Army, she is trying to ease back into civilian life on her families South Dakota ranch, which is NOT going well at all.  To stay busy and sober at least some of the time, she takes a job at a local bar, but her life is turned ass over head when her friend and former Army buddy Jason Hawley comes to town.  See Jason works for Titan Oil, who is a huge Canadian Oil Company), and he is there to try and convince the citizens of Eagle River County that the proposed pipeline that Titan Oil wants to run through their community and ranches is a good thing.  The citizen's aren't buying it.  The citizen's want nothing at all to do with Titan Oil OR Jason Hawley.

Thing's get even worse when Mercy finds Jason's brutally murdered body outside the bar that she works at.  From Mercy's point of view no seems all that interested in finding the person who killed Jason and that includes the sheriff.  That's when Mercy makes it her personal mission to find Jason's killer.  But the deeper Mercy gets into finding Jason's killer, the more dark secrets she uncovers about her little South Dakota town.

As with Mercy Kill, Armstrong paints an extremely descriptive picture that you feel like you are actually there with Mercy.  Right there in Eagle River.  Such vivid pictures.  I thought that the story was a fast paced, intense roller coaster of a ride.  One that I just could not put down.  I really enjoyed that Mercy as well as the other characters in this book were written in a way that made them seem just as hard and borderline unforgiving as the landscape they inhabit.
Posted by Jamie at 2:51 AM