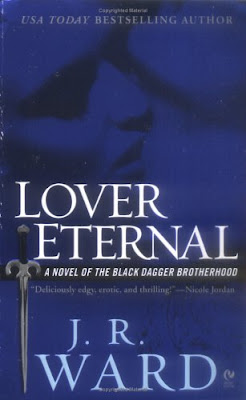 Synopsis:In the shadows of the night in Caldwell, New York, there's a deadly turf war raging between vampires and their slayers. There exists a secret bound of brothers like no other-six vampire warriors, defenders of their race. Possessed bu a deadly beast Rhage is the most dangerous of the Black Dagger Brotherhood.

Within the brotherhood, Rhage is the vampire with the strongest appetites. He's the best fighter, the quickest to act on his impulses, and the most voracious lover-for inside him burns ferocious curse cast by the Scribe Virgin. Owned by this dark side, Rhage fears the time when his inner dragon is unleashed, making him a danger to everyone around him.

Mary Luce, a survivor of many hardships is unwittingly thrown into the vampire world and reliant to Rhage's protection. With a life-threatening curse of her own, Mary is not looking for love. She lost her faith in miracles years ago. But when Rhage's intense animal attraction turns into something more emotional, he knows that he must make Mary his alone. And while their enemies close in, Mary fights desperately to gain life eternal with the one she loves...

Lover Eternal is the second book in the Black Dagger Brotherhood and is Rhage's story.  Rhage a LONG time ago was cursed by the Scribe Virgin and now he's got about 91 years left on a 200 year old curse.  Well that is until he meets Mary that is.  That's when things start to get real interesting around the brotherhood.

Mary on the other hand is a strong independent woman.  She has to be to have gone through the "curse" she's gone through and come out on the other side.  Well that is until that nasty old "curse" comes back again.  Then she meets Rhage, through a friend (who she has no idea is actually a vampire) and all bets are off.

Unlike the first book where there was a LOT of fighting and almost a lot of romance this book in the series goes the other way.  Where there's a LOT of romance and almost a lot of fighting.  What I really liked about this book is that J.R. Ward took a vampire that had been written to be shall we say a fighting/sex addict to keep his beast (which you learn some shocking things about through the course of the book) at bay and turned him into fighting/monogamy addict.  Really teaching an old dog a new trick.

Another thing that I really liked about this book was the way that Rhage spoke to Mary.  Even from the beginning it was really sexy (in my opinion) when he talked to her like he was talking to his wife.  It gave me warm fuzzies inside to read all these words of love coming out of a big, strong, sexy as hell warrior vampire.

I'm usually not one for cliff hanger endings but I think with the build up throughout this story to Zsadist and Bella's story that the cliff hanger was very appropriate.  I made me want to keep reading and pick up the next book and start that one right away...which I did.  I can honestly say that I spent my entire Sunday, from the time I got up at around 1 am until I went to bed at a little after 5 pm, reading the Black Dagger Brotherhood.  I just could not stop myself.
Posted by Jamie at 2:24 AM