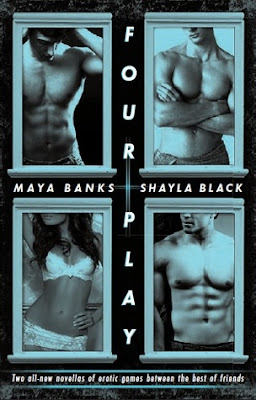 At the beginning of this story I was really into it.  It features main characters Zoe and Chase (who happens to be a yummy firefighter).  After a round of spontanious panty combusting sex they are having themselves a little pillow talk and they start talking about their fantasies.  Both fantasies are pretty incredible to be honest.

Well the vast majority of the story, ok all but a couple pages, are about fulfilling those fantasies.  In the beginning the sex scenes were Awesome Sauce, but as the story went along I think that it was mostly focused on the sex and not so much on the actual characters or the relationship. Which come to find out it was written like that on purpose as part of the story. As a result I was kind of turned off by this story by the end of it. Actually, I could hardly wait for it to end.

I'm not giving up on Ms. Banks though.  I can't base all of an author's works on one story.  I do like the way that Ms. Banks writes her works and minus an obscene (in my opinion anyway) amount of sex in this particular story she sure does know how to write one hell of a love scene.

I really got into this particular story and was sad to see it end.  Of the 4 characters in this story Tucker is the only one that has actually known Kelsey almost her entire life.  The other two male characters are Kelsey's boss and her peeping tom-smoking hot-fire fighter neighbor.  I thought that Kelsey herself was a very likeable character who is one of those girls that be one of the girls as well as one of the guys.

It was actually very interesting to read how realtionship became pretty dang solid through the course of this story.  The truth of the matter is that the 3 guys only know each other because of Kelsey and they all kind of struggle with their possessiveness of her to make her happy.  Because she really can't bring herself to choose between them.  She reads very much like an "all or nothing" type of girl.